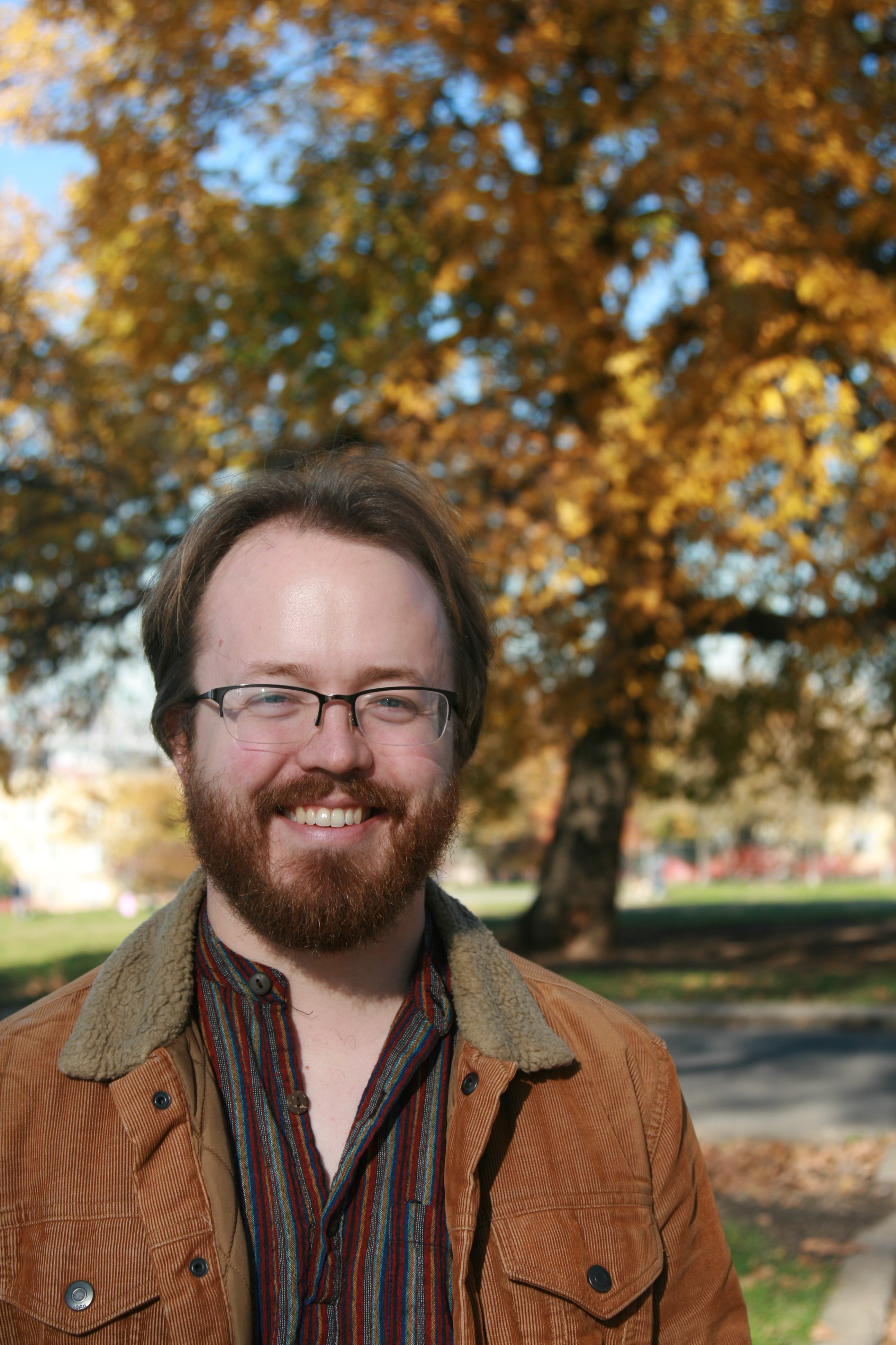 Lin•strom, n.: in Swedish, a name evoking a brook or stream (strom) flowing through blue flax (or linseed, lin) blossoms; thus, a landscape marked by ongoing change shaping an old field, liquid movement inscribing tradition and feeding the roots of plants both horticultural (Linum usitatissimum, cultivated for food and fiber) and wild (Linum bienne, native to the Mediterranian and western Europe); thus, both rooted and searching, transient and local. Sometimes considered anachronistic.

John Linstrom grew up in South Haven, Michigan, the hometown of the great Progressive Era horticulturist and New Agrarian philosopher Liberty Hyde Bailey. After attending Valparaiso University and its interdisciplinary honors college, Christ College, to earn a BA in English and Humanities, John headed farther into the belly of the Midwestern beast for an MFA in Creative Writing and Environment from Iowa State University. He began researching Liberty Hyde Bailey's life and work while a student at Iowa State, at which time he also started working at Bailey's childhood home, now the Liberty Hyde Bailey Museum, during the summers, quickly rising from intern, to curator, and finally to executive director of the small nonprofit museum. His nonfiction book project explores the layers of history in that small town and the marginal landscape that surrounds it by delving into the experiences of his and Bailey's lives and the hundred-thirty years that separate them.

He currently lives with his wife and their joyful window garden in Queens, New York, where he is a doctoral candidate in English and American Literature at New York University and a member of the Space Poets collective. His doctoral research explores various land-based cosmologies in American literature of the Progressive Era that can be characterized as agrarian, indigenous, and/or diasporic, and investigates the ways in which such cosmological modes disrupt the narratives of western scientism and might inform current discourses surrounding climate change in the Anthropocene.

John is series editor of The Liberty Hyde Bailey Library from Comstock Publishing Associates of Cornell University Press. He prepared the centennial edition of Liberty Hyde Bailey's ecospheric manifesto, The Holy Earth (Counterpoint, 2015), with a new foreword by Wendell Berry, and coedited a collection of Bailey's garden writings, titled The Liberty Hyde Bailey Gardener's Companion: Essential Writings (Comstock-Cornell UP, 2019). John's poems have recently appeared or are forthcoming in North American Review, Vallum: Contemporary Poetry, Atlanta Review, The New Criterion, and Commonweal Magazine, his nonfiction appears in Newfound and Prairie Gold: An Anthology of the American Heartland, and his scholarship is forthcoming in The Sower and the Seer: Perspectives on the Intellectual History of the American Midwest (Wisconsin Historical Society).

John’s researched memoir, tentatively titled Undertone, takes the life and work of L. H. Bailey and slams it smack into twenty-first century topsoil. By putting Bailey’s high ideals and agrarian reform project into the context of Linstrom’s postmodern life, these fellow South Havenites, separated by some hundred thirty years’ nearness, struggle to remap better ways to live as individual and as community member in a corporatized and fad-stricken world. Central to that struggle is a looming question of place and home—how can we find true sanctuary in a society so insistently transient and a planet so suddenly volatile? How do we haven ourselves when our anchor lines keep snapping in the unearthly current?

John's dissertation, titled Land, Labor, Literature: Ecospheric Critique from the Margins of the Progressive Era, seeks to intervene in ecocritical discourse with an insistence that ecospheric imagination predates Western empirical/colonial models of modernity and Bruno Latour's theorized "Great Divide." He considers non- and even anti-modern cosmologies under three major categories—agrarian, indigenous, and diasporic—and seeks for ways in which each of these cosmological modes helps us understand humanity's context in the living creative ecosphere, especially in the ways in which these modes found their articulation in American literature written in and about the period of massive agricultural mechanization and migration from Reconstruction to the Dust Bowl. He also finds that these cosmological modes continue to influence people's lives today. 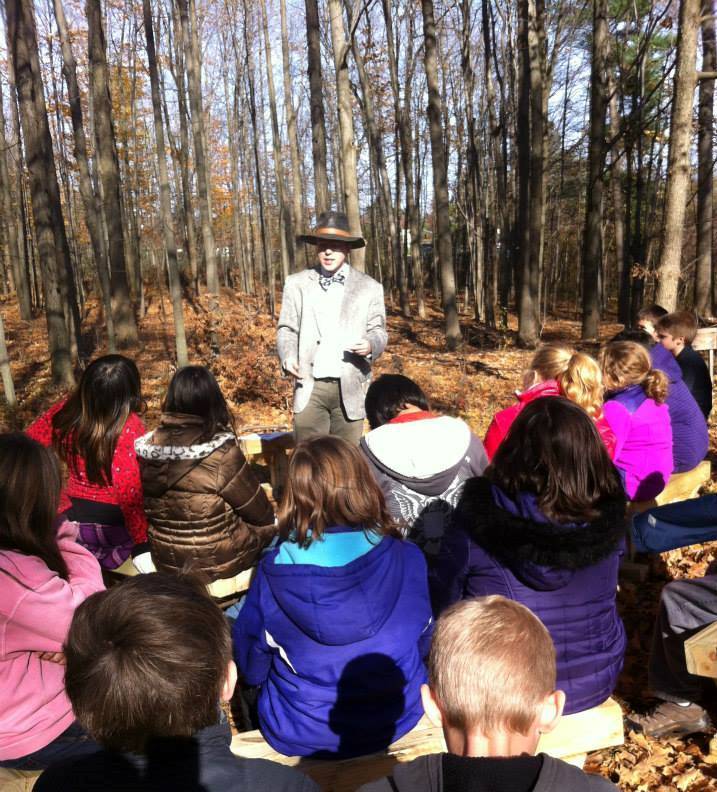 John taught courses in creative writing and (eco-)composition while an MFA student at Iowa State, in 2014 he taught a graduate course in research writing and methodology at his undergraduate alma mater, he has been TA for Core and English undergraduate coursework at New York University, and in the summer of 2018 he taught a course on "Literature and Environment: Modern American Literature and Questions of Ecology" at NYU. He has also done educational work with kids ages 6-11 through the Bailey Museum's summer program "Bailey's Budding Naturalists" and through the museum's other educational outreach efforts, including support of the Liberty Hyde Bailey Outdoor Learning Center at North Shore Elementary School, which was begun in 2010 by his inspirational mother and fourth-grade teacher Rebecca Linstrom. He taught outdoor poetry writing to Girl Scouts at the Comstock Girl Scout Camp while there as the Bailiwick Writer in Residence sponsored by AgArts.

A full list of John's publications can be found here, information about The Liberty Hyde Bailey Gardener's Companion here and The Holy Earth here, and audio and other performance of his work here. John has blogged on Medium. For a full academic profile, please refer to his CV.  You can also view his LinkedIn profile or follow him on Twitter, Instagram, and Facebook, if you dare. Please enjoy exporing this site, and let John know what you think by contacting him directly, here.

Liberty Hyde Bailey, Jr. (1858-1954) was an influential agrarian philosopher, advocate of "nature-study" in primary schools, "Father of Modern Horticulture," bestselling author of over 70 books and editor of some 140 more, Chair of Theodore Roosevelt's national Commission on Country Life, pioneering plant explorer and photographer, and the revered founding Dean of the New York State College of Agriculture at Cornell University.  His writings have influenced writers as diverse and influential as Aldo Leopold, Pearl Buck, Wendell Berry, Wes Jackson, and even Marianne Moore.  You can read a thumbnail sketch of his fascinating life story, which John wrote for the Bailey Museum, here, or check out the 1956 biography by Philip Dorf, Liberty Hyde Bailey: An Informal Biography, for a fuller profile.